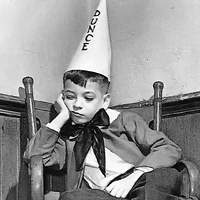 A variation of the word ‘dunce’ appears in the Dictionary of Victorian Insults & Niceties. ‘Dunce’ is one of those words that has a more interesting history because it comes from somebody’s name: Duns Scotus.

Duns Scotus (1266-1308) was no dummy. He’s generally considered one of the most important philosophers of the Middle Ages.

Scotus was  ordained as a Catholic priest at the Church of Saint Andrew in Northampton, England, in 1291. That he was called Johannes Duns suggests that he was from Duns, in Berwickshire, Scotland, because it was traditional to call people by their Christian name followed by their hometown.

Scotus’ philosophies helped shape modern Catholicism. He’s often associated with voluntarism, the tendency to emphasize God’s will and human freedom in all philosophical issues. His philosophy argued for the existence of God, and emphasized the relationships between all living things. He also defended the Immaculate Conception of Mary. Pope Pius IX’s 1854 declaration of the dogma of the Immaculate Conception uses Scotus’ arguments on the subject, “at the first moment of Her conception, Mary was preserved free from the stain of original sin, in view of the merits of Jesus Christ.” Scotus’ position was hailed as “a correct expression of the faith of the Apostles.”

But people didn’t always think Scotus was so clever, and it’s amazing what a lasting impression criticism can have on our language. Sixteenth-century philosophers, who liked Scotus’ work were called ‘Dunse’ (like some people are called Marxist or Kantian). For the most part, sixteenth-century philosophers disliked Scotus’ work, and accused him of sophistry. Hence, as a variation of ‘Dunse’ the term ‘dunce’ was born, meaning “somebody who is incapable of scholarship.”